Amazing Reception For The Athletes Parade A crowd estimated at over a million lined the streets as the 300-strong ParalympicsGB team joined over 500 of their Olympic counterparts to parade through the centre of London today (Monday) at the end of what Prime Minister David Cameron called “a golden summer of sport”.

The parade of 21 floats, led by lions representing ParalympicsGB and Team GB, processed from Mansion House to the Queen Victoria Memorial at Buckingham Palace.

Crowds massed along the route up to Trafalgar Square celebrated Great Britain’s Olympic success and ParalympicsGB’s achievement in winning an unprecedented 120 medals, 34 of them gold to finish third in the medal table.

The route along the Mall was reserved for 9,000 of the volunteers who dotted venues and received two huge ovations at Sunday night’s Paralympic Closing Ceremony.

The parade began less than 18 hours after Britain’s Paralympic athletes said goodbye to the Olympic Stadium, with Sarah Storey and David Weir – who both won four gold medals – carrying the Union Flag.

Storey travelled on float seven, with her team-mates from the Olympic and Paralympic Cycling squads, including double Olympic champion Victoria Pendleton, who described Storey as “an absolute legend in female sport – full stop”.

“It’s the perfect way to end what’s been an incredible six weeks. To follow on from these guys is such a privilege,” said Storey.

Londoner Weir, who won wheelchair races over 800m, 1500m, 5,000m and the Marathon said: “The crowds are fantastic. We’ve had 11 days of this and it’s great for Paralympic sport. I think a lot of people respect that we’re truly great athletes and we’ve shown that.”

Eleanor Simmonds, the 17-year-old who won four medals in the pool joined sprinter Jonnie Peacock in extinguishing the Paralympic flame from the cauldron on Sunday night, then passing in on to a hoard of torchbearers around the arena.

“To be walking away from a home Paralympic Games with two golds, a silver and a bronze, I couldn’t ask for anything more,” she said.

“It was a great Games, a great Closing Ceremony last night and being able to ignite the flames was amazing.”

Peacock, from Doddington in Cambridgeshire, who was only talented spotted after the Beijing Games and won gold in the T44 100m at the Paralympic Games, said: “It’s absolutely amazing to see the public getting behind British sport and that Paralympic athletes are getting the recognition they deserve.”

For Sitting Volleyball player Martine Wright, the parade through London’s streets came seven years after she lost her legs in the Aldgate underground explosion in the 7/7 bombings – the day after London’s successful bid to host the Olympic and Paralympic Games was announced.

“This is the end of a journey that I think I was always meant to make,” said an emotional Wright, 39, whose team finished 8th overall in the Paralympic tournament.

“Like every person in this parade I can’t believe the crowds. It’s the absolute perfect icing on a cake for a perfect journey.

“I count myself so lucky that I’m here. You can go through the most tragic things in life but you can still dream dreams and achieve them.”

For many Paralympians, housed in the athletes’ Village until this morning, the parade was a first chance to step outside the “bubble” of competition and realise the depth of public awareness and support.

Archer Danielle Brown, who won gold in the women’s individual Compound Open event, said: “I was so focused on my shooting that I didn’t really think about this. But after that, everything has been totally surreal. I’ve been working so hard it’s crazy and now I’ve got gold post boxes in my home town of Skipton.

“I’ve done Games before but I don’t think anything can top this, and it’s down to the home support. The numbers of people were so inspiring.”

Wheelchair Basketball player Jon Pollock was lifted by the crowds, two day after his team missed out on a bronze medal when they were defeated by the USA.

“Today was like nothing we expected. Half of us wanted to go home and I’m really glad we didn’t. It was so emotional. Every now and again I was wiping the tears away,” said Pollock, a veteran of four Games who comes from Wigan.

“I feel we’ve touched the public. It’s the highlight of my 21-year career.”

Billy Thompson, goalkeeper in the 7-a-side Football team, said: “I felt like a king being paraded in front of the court. It was a marvellous experience.

“I’ve gone from playing Sunday League knockabouts to playing in front of 16000 people. It’s such a fabulous feeling,” added the Croydon player.

His team-mate Martin Sinclair, from Camberley, said: “I didn’t think I’d be here eight years ago when I hurt my hip. I’m shell shocked to see so much support.

Sinclair was one of several Paralympians who expressed the belief that the parade was the proof of a sea-change for the movement.

Peter Norfolk, twice a Quad singles Tennis champion in the past, won doubles silver this time with partner Andy Lapthorne, after acting as ParalympicsGB’s flagbearer at the Opening Ceremony.

“I never had anything like this in my career,” he said. “It’s mad, fantastic.

Asked about the change during his career the three-time Paralympian said: “This is disabled sport but it’s elite sport. We’re now elite athletes.

“Look at some of the stunning performances that everyone has done. I’d sit down and pay to watch that on TV.”

Helena Lucas, who at her second Games became the first British Sailor to win gold when she took the 2.4mR class, said: “It’s quite overwhelming to see the sheer number of people who have come out. The British public made these Games for us.

“These Games have really changed the way people see the Paralympics. They see us as athletes rather than disabled athletes. We’re the same as the Olympians, we’re out there to win medals, disabilities don’t matter.”

During the parade, double gold medallist Hannah Cockcroft joked on Twitter: “Can the hot guy who just said he loved me give me a tweet?”

The wheelchair racer from Halifax who won the T34 100m and 200m gold, said: “The Paralympics has come out of the Olympics’ shadow so much.

“People have realised we are elite athletes just like the Olympians. We are getting more recognised. I just want it to continue.”

At Buckingham Palace the parade witnessed a spectacular fly-past that included the British Airways jet with the words “Thank You” painted on its underside, Sea King rescue helicopters and nine jets from the Red Arrows, trailing red, white and blue plumes.

Storey addressed the crowd at the Queen Victoria Memorial, wearing her four gold medals, saying: “All the athletes here on the parade want to thank every single person in the UK because without that incredible support we couldn’t have done what we’ve done and we couldn’t bring home this bling.”

Prime Minister David Cameron said: “To every one of our great Olympians and Paralympians you have given us moments we will never forget, the whole country salutes your brilliance.

“If other people’s children are anything like mine, they’re dreaming about being Bradley Wiggins, Jessica Ennis, Dave Weir or Jonnie Peacock, they’re begging their parents to set up mini-Olympics, they’re thinking about sport and disability in ways they never did before.”

HRH the Princess Royal, Princess Anne, who is President of the British Olympic Association, underlined the role of athletes in the years ahead.

“Thank you to our athletes for their always-inspiring achievements. I do mean all the athletes, not just those who’ve won medals, all of them,

“You are now Olympians and Paralympians. You set the tone for the future.” 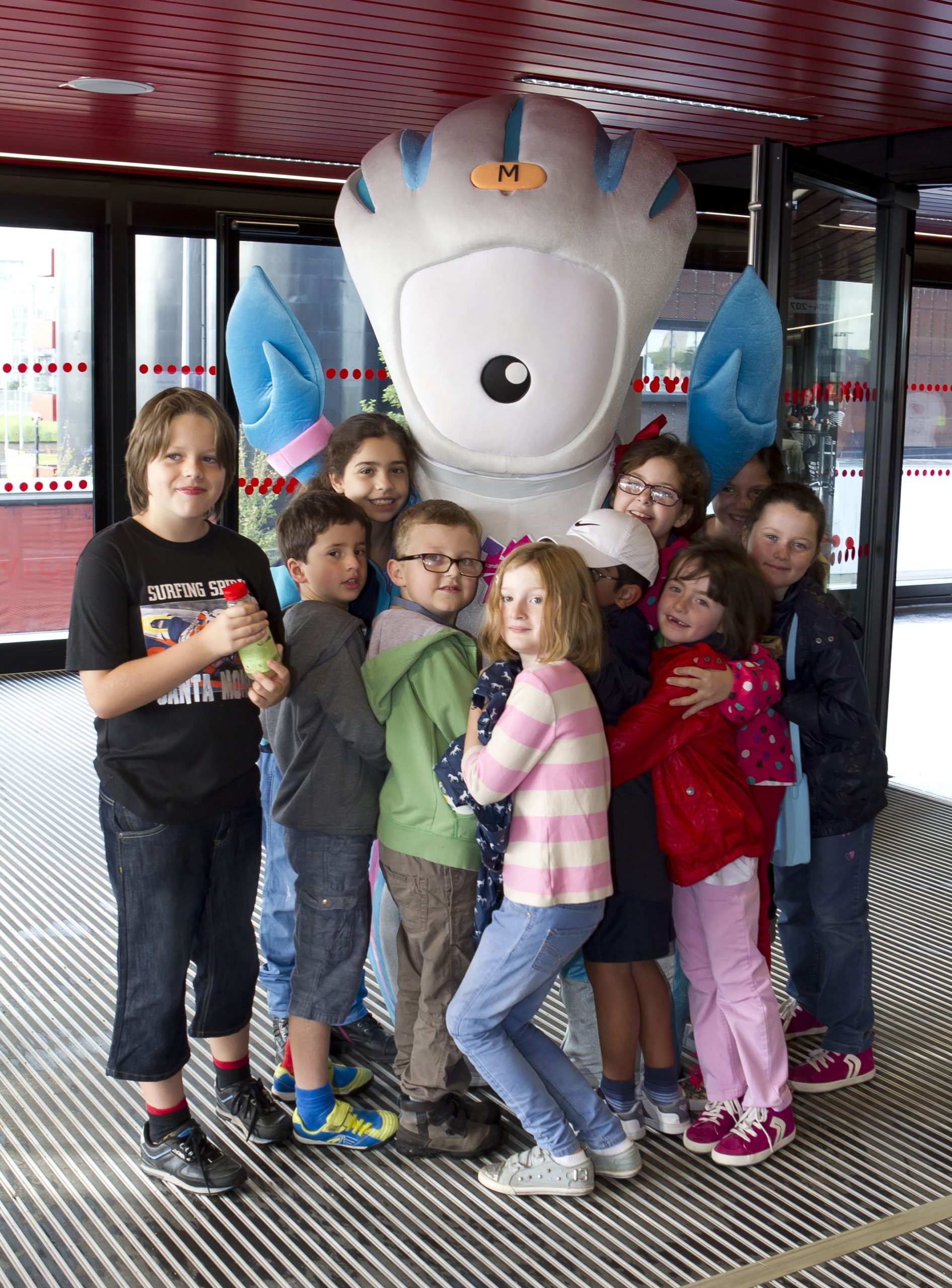