‘As soon as he held him, he fell in love’: Autistic boy’s life is transformed by his new best friend…a pet lizard called Spike

An autistic boy’s life has been transformed by his best friend – a pet lizard called Spike.  Callum Lake has Asperger syndrome, a form of autism which affects the way he communicates with, and relates to, others.

The condition means the 10-year-old struggles to read people’s emotions and to understand social situations, making it difficult for him to make friends at school.

But in recent months, Callum’s mother, Karen, has noticed dramatic changes in her son’s character, which she attributes to his new pet gecko.

Callum, from Hurdsfield, in Cheshire, is responsible for looking after Spike, which has given him more independence and greater confidence in his own abilities.

Spike has also given Callum something to focus on when he gets anxious, which has helped him keep calm, and helped him strike up conversations with his classmates at school.

Callum said: ‘Looking after Spike is really fun. I’ve started getting up really early in the mornings so I can sit and eat my breakfast with him before school.

‘I feed Spike worms but my mum has to feed him crickets because I don’t like them jumping around.’

Ms Lake, 38, said: ‘Callum had always had a special interest in dinosaurs.

‘One day he asked for one and a lizard seemed like the next best thing so we bought Spike.

‘As soon as Callum held him, he fell in love with him. He’s his best friend.

‘Supporting people with autism, like Callum, who can and do want to form friendships goes a long a way towards ending the isolation that many people with the condition feel.

‘Spike may be small, but he has had a huge impact on Callum’s life and it’s heart-warming to see him so much more confident and independent with family and at home.’

Callum lives with his mother, her partner Mark, 41, and sister Niamph, six.

He was diagnosed two years ago after four years of investigations by health specialists.

Ms Lake, a teaching assistant, said: ‘When he was young we thought Callum was a “pipe and slippers” person, someone who just liked things a certain way.

‘He didn’t cope with change very well. When he went to school teachers noticed his problems with communication, avoiding eye contact, and we started looking at what could be the issue.

‘Although it was hard to hear Callum had Asperger syndrome, it was a relief that we had an answer and could start supporting him.’

Ms Lake is also an ambassador for the National Autistic Society, the UK’s leading charity for people affected by autism.

Researchers at the Hospital Research Centre of Brest in France believe that the social skills of children with autism improve if they have a pet.

The scientists found that children with the disorder are better able to comfort other people and to share their possessions if they have a pet.

It is thought that this could be because introducing a pet into a family increases family bonds and interaction.

‘A newspaper for people with learning disabilities was a lightbulb moment’ 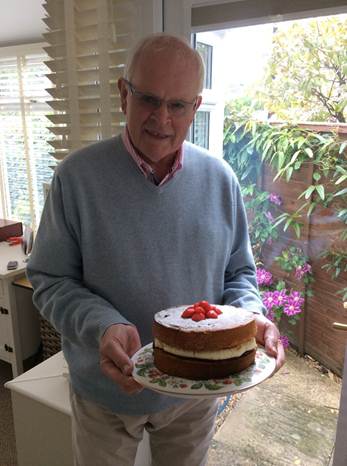