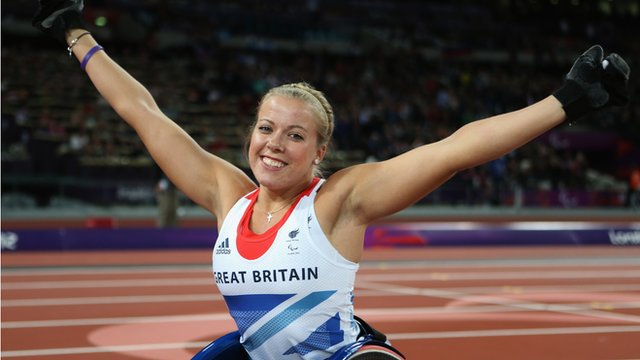 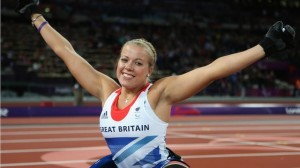 Great Britain’s double world and Paralympic champion Hannah Cockroft has dominated the T34 sprints since bursting on to the international circuit five years ago. Now the 22-year-old has set herself a new challenge as she goes for gold in the 800m, as well as the 100m, at the Swansea 2014 IPC Athletics European Championships which start on Monday (18 August).With six gold medals from two World Championships and a Paralympic Games already under her belt, winning, and racing, has not given Cockroft the same adrenaline rush that she enjoyed in the early days of her para-athletics career.Now the Halifax-born racer is determined to add middle distance glory to her long list of achievements – which includes setting no fewer than 30 world records across 100m, 200m, 400m and 800m since 2010.“The 800m scares me,” she said. “I like the 800m because with the 100m now I feel very confident – I know that there’s no one there at the moment who can beat me, and for a long time I kind of lost the edge of racing, I lost the adrenaline of it.  I could rock up to a race and look at the start line and know that there was no girl on that line who could physically come within 30 metres of me.“But in the 800m there are four or five girls who could all very easily beat me. In the Europeans there’s only really Mel Nicholls who could beat my time, or beat me on the line, but it adds that adrenaline, it makes it scary again, and that’s what I love about racing – it’s brought back that love of the race and that rush of winning, or not knowing what’s going to happen in a race.”Whilst Cockroft is relishing the chance to test herself over the longer distances, she is determined to remain the best in the world, and has been training alongside a number of T54 para-athletes including Great Britain’s distance stars Jade Jones and Shelly Woods, to help hone her skills.“It is going to be hard to win two gold medals and it is a really big challenge. Trying to train for a sprint and a longer distance is physically very demanding,” she added.“I’ve worked on my tactics – that was one thing I’ve never had to do before, and it’s quite difficult, but I’ve learnt a lot. It’s still a learning curve, and I’ll still be learning right up to Rio, but for now going into Swansea I’m feeling fairly confident.“My real aim is to become European champion, it’s the only title I don’t yet hold, and I’d like to claim it and finish off my collection and just be able to say that I’m all-round the best T34 in the world.”If Cockroft’s performances to date are anything to go by that is a moniker she deserves – at the ParAthletics IPC Grand Prix in Nottwil earlier this year, she bettered her own 100m and 200m T34 world records, clocking 17.31 seconds in the shorter sprint. Then in Indianapolis in June she set a new world record in the 800m T34.But despite these successes, and further wins in the UK in July, ‘Hurricane Hannah’ believes she still has got a lot more to give.“I’m breaking my record by 0.3 seconds and I see my teammates pb-ing by five seconds – I’d love to do that. But I guess you’ve got to take it little by little when you’re at the top, and any progress is progress.“I know it’s been a hard year for me, but I think if I come away with anything less than two gold medals then I’ll start thinking something’s slipped – and that shouldn’t have happened, and I’ll be really disappointed.”Of course a lot has changed for Cockroft since she hit the headlines in 2012, winning two Paralympic gold medals in front of her home crowd.Public appearances, requests for her time, and moving out of the family home to start university have all added their own pressures; Cockroft is beginning to realise that maybe some things have to give if she is to stay at the top of her game.“It’s been such a busy year for me, I finished my first year at university, I’ve travelled to Australia, America, Switzerland – it’s my first year living away from home too, so it’s been kind of crazy. To stay on top of the world and do a full-time degree? I thought I could do it but I think it’s become just a little bit too much.”At the back of Cockroft’s mind is the realisation that while she may be the one to beat right now, that could all change.Youngsters like 14-year-old American Alexa Halko show great promise – that is why fast times remain so important.“I want to make my times unbeatable,” she explained. “So for me, I’m out there racing against myself but at the same time there’s always unknown girls that I’m racing against in my head right now.“Come Rio, they’re going to be right up there with me and I’m going to have a lot of competition, so I just have to stay that step ahead – it’s just a little bit annoying trying to do that and just not getting what you want when you’re trying to do it.“So it is massively important that I get this right and go in there and put down some good times and just show everyone that I can pretty much do everything.”Her opponents – and her fans – probably think that’s the case anyway.A record 560 athletes from 37 countries will be taking part in the 2014 IPC Athletics European Championships between 18-23 August at Swansea University, Great Britain.Some tickets, priced at £3, are still available to purchase for Swansea 2014 and can be purchased from www.swansea2014.com/tickets.

Scottish women encouraged to run with mum this summer