JUST weeks after the Paralympics gave disabled people in Scotland hope that they might be given more opportunities, the Con-Dem shake-up will see them face humiliating medical assessments.

AROUND 74,000 Scots with disabilities are to be stripped of their benefits by the Con-Dem Government.

After the glory of the Paralympics, disabled people hoped for a new dawn of fewer prejudices and more opportunities.

Instead, a shake-up of the welfare system will leave them facing benefits cuts, humiliating medical assessments and the prospect of being left housebound by lack of cash.

Tressa Burke, of the Glasgow Disability Alliance, said yesterday: “People are absolutely terrified about this.

“It seems to be a great paradox that you have a platform like the Paralympics creating the opportunity for disability issues to be put on the agenda.

“And, at the same time, the UK Government’s catastrophic changes, which are severely affecting disabled people, are being pushed through.”

Under the changes, Disability Living Allowance (DLA) is being replaced with Personal Independence Payment (PIP).

Every disabled person who qualified for DLA will now face tough new assessments to see if they are eligible for the new benefit.

And because the criteria for claiming has changed, many will lose out.

The Government expect claims to be cut by 20 per cent.

To achieve the projected savings in Scotland, one in three disabled people will fail to qualify for PIP.

Disability campaigners Inclusion Scotland estimate that 74,000 disabled claimants north of the Border will be stripped of their benefits.

And tens of thousands more will see their entitlements cut.

The first assessments for PIP will begin next spring in the north of England before being extended across the UK.

In Scotland, the assessments will be carried out by contractors Atos – the French firm who have been slated for their handling of Incapacity Benefit assessments.

DLA is a benefit that covers the additional costs of being disabled. It has two parts – the care component and the mobility component.

The care component has three levels and the mobility has two.

PIP removes the lower rate of the care component, effectively slicing off a whole tranche of claimants. It also places more emphasis on how mobile the claimant is.

Dr Pauline Nolan, of Inclusion Scotland, said: “We are very concerned that people with mental health conditions, people with learning disabilities and cognitive impairments like autism will just lose that lower rate and the money to cover their care costs.

“It is causing a lot of anxiety and we think that mental health conditions will worsen or people will develop them where they didn’t have them before because they are so worried about losing the money.”

Anne Begg MP, who was made a dame for services to disabled people, said: “It doesn’t matter if you are a Paralympian or just an ordinary disabled person, you still have extra expenses because of your disability.”

She said some blind people are unlikely to qualify for PIP because they are mobile. But they need the cash to buy equipment that is vital to their everyday lives.

Those who are deaf will also suffer, along with thousands of people who have neurological problems including multiple sclerosis, Parkinson’s and motor neurone disease.

The Con-Dems are proposing to slash £18billion from welfare benefits – half of it from disabled people.

In Scotland, disabled people and their families will have more than £1billion snatched from them.

As a result, they will have less to spend and the economy will lose out by £2.5billion.

The cuts take no account of the extra costs of being disabled. They include paying for homes to be adapted, higher transport costs, wheelchairs and, in some cases, special clothing.

Bill Scott, of Inclusion Scotland, said: “The new PIP criteria for mobility penalise those who can ‘self-mobilise’, even if they have no limbs.

“Obviously, that includes many Paralympians.

“As it stands, Paralympians will get no mobility points under the new assessment if they can self-mobilise for 50 metres.

“Other Paralympic athletes, for example those with learning difficulties, may also lose payments.”

So while the Paralympians were, rightly, treated as heroes during the Games, they are about to find themselves in the same situation as the tens of thousands of ordinary disabled people who face fear and uncertaintly for the future.

Janet, 53, was assessed by Government contractors Atos after she applied for Disability Living Allowance (DLA) and Employment Support Allowance (ESA).

At the time, she had pulmonary fibrosis and scarring of the lungs and she was struggling to breathe.

A doctor from French firm Atos was sent to Janet’s home in Dennistoun, Glasgow, to assess her fitness to work in the summer of last year.

He deemed her fit to work and her benefits application was declined.

She died in January.

Janet’s husband Lawrie said: “I knew the seriousness of her condition and so did the doctor yet he reckoned she was fit enough to work. It was disgusting.

“He was very insensitive. It was plain to see she was unwell because her breathing was laboured.

“I was very angry. She was in poor health at the time and she deteriorated after that.

“Subsequently, we appealed against the DLA decison and it was reversed. But the ESA decision was never reversed.”

Marlene’s story – If they take cash away, how will I keep going?

The 57-year-old has spina bifida and each pair of shoes have to be specially made – at a cost of £250.

She said: “The last time I asked about shoes, I was told if I had two pairs, I wasn’t eligible for another pair. What woman do you know that’s happy just with two pairs of shoes?”

Marlene uses a wheelchair and crutches to get around and she receives Disability Living Allowance.

She uses some of the cash to put petrol in her Motability car. And her biggest worry is that if her benefits are taken off her, she will no longer be able to get around.

Marlene, of Knightswood, Glasgow, said her life would be drastically curtailed without her motor. She added: “At the moment, I get enough to live on but not to have a life.

“I don’t know what’s going to happen with this new benefit because I’m not sure what it’s going to involve. But it’s a worry because if they take more money off us, how am I going to keep going?”

DISABLED Denis is so worried about losing his benefits that he wanted to withhold his surname.

The 59-year-old has a Motability car, which he is terrified of losing.

THE father of a Special Olympics gold medal winner fears the welfare reforms will crush his son’s dreams of an independent life.

Pensioner Norman Gray will travel to the Scottish Parliament today to warn MSPs about the devastating impact that David Cameron’s plans will have.

Norman’s son Andrew has Asperger’s syndrome, which is a form of autism.

He struggles to understand consequences or to empathise with others. But with suitable support, he lives a full life.

Andrew has his own flat, he works 20 hours a week as a waiter in a hotel and he is making plans to marry girlfriend Sharon Davison.

The 32-year-old is also a sporting hero, taking gold in the 25m butterfly swimming event in the Special Olympics in Shanghai in 2007.

But that benefit is being replaced with Personal Independence Payment (PIP) – and it is unlikely Andrew will qualify to claim.

His dad fears that will mean his boy will no longer be able to pursue his dreams.

Norman, 70, said: “The worst-case scenario is that he won’t be able to live on what he’s got. His independence could be very seriously affected.

“One of the reasons he was able to get a mortgage is because he has the DLA. If that was withdrawn, who knows what might happen?”

Andrew struggles to understand the complicated details of the changes.

But he said: “I am worried. I wonder what is happening with my benefits and whether I’ll still qualify.”

Between work, DLA and tax credits, Andrew has a weekly income of £250.

If he does not get accepted for PIP, he will have to look for full-time employment to continue living independently.

Norman fears that could affect Andrew’s mental health. And it could mean he would have to give up the part-time job he loves in the Invercarse Hotel near his Dundee home

Norman added: “We have found in the past that when he works more, he can become more difficult to manage.”

He said: “We know that the Government is under huge pressure to cut costs.

“However, they risk creating a false economy as the loss of crucial benefits leaves people struggling and needing greater levels of support in the longer term.”

MSPs on Holyrood’s welfare reform committee will today hear from two other Scots worried about the changes.

Henry Sherlock, who is blind, has heart disease, diabetes and depression, will accuse the coalition of putting the most vulnerable in society in a state of “true fear”.

Janice Scott will discuss the impact of the changes on her husband, who was left disabled after a scooter accident.

He says that, without the car, his life will shut down.

Denis does not get much in Disability Living Allowance (DLA) – £50 for his car and a smaller sum to adapt his house to his needs.

He said: “If they take that all away, I will have nothing. I will be a prisoner in my own house.”

As a baby, Denis had convulsions following an injection.

Doctors had to bore a hole in his head, which left a scar on his brain.

He said: “I also have osteoarthritis and I find it very difficult to walk.

“I have pain all the time. I take analgesics every day. My car means everything to me and to lose it would be a tragedy.”

Denis added: “I have diabetes and sleep apnoea and I have to take quinine for my legs.

“I look well on the outside and try to have a positive disposition.

“But without DLA, my whole quality of life will change and I will go into a terrible old age.

“Life will not be worth living.” 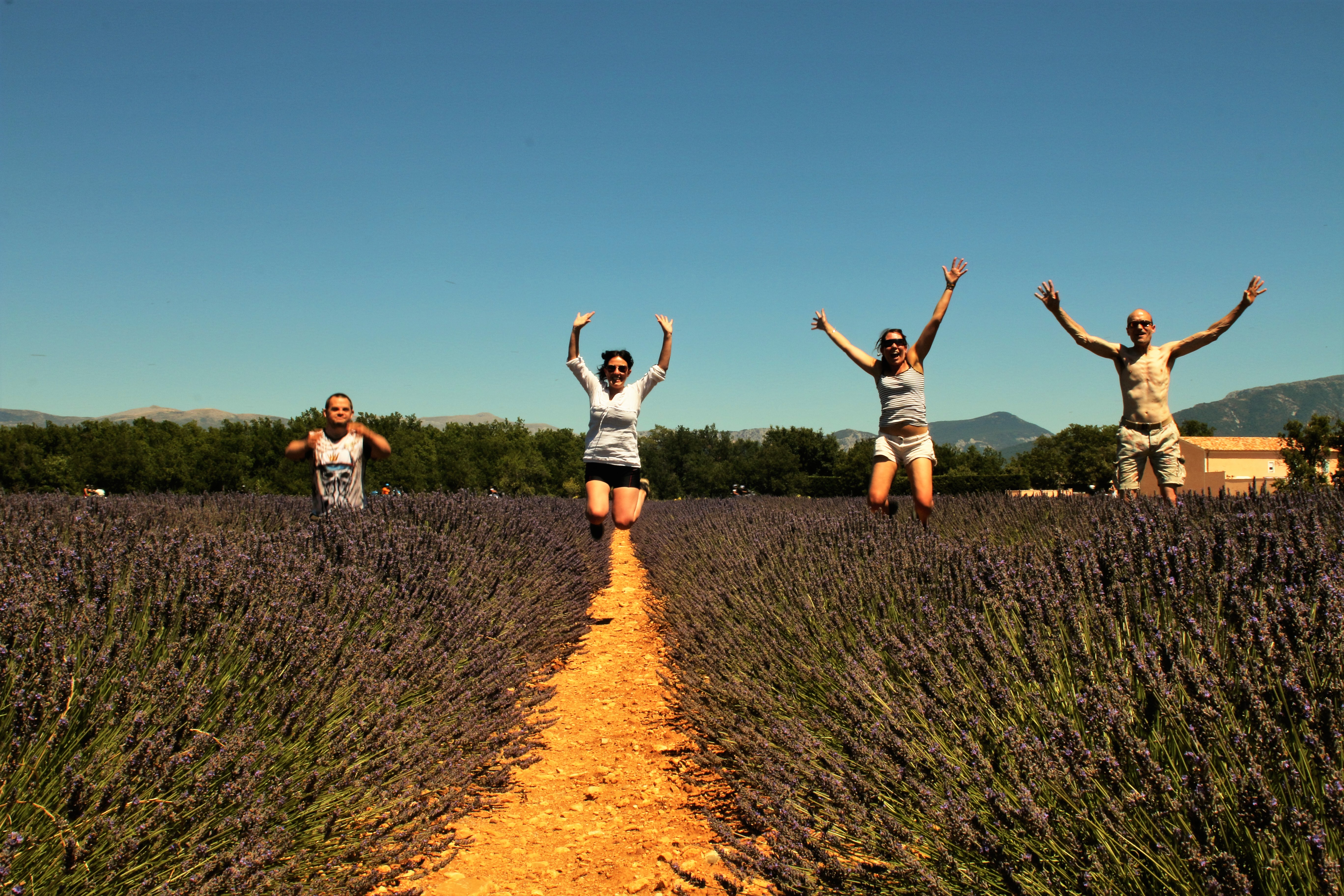 Win a Supported Holiday in the South of France!