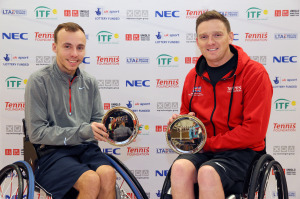 Brits Andy Lapthorne and Jamie Burdekin clinched the Nottingham Indoor Wheelchair Tennis Tournament quad doubles crown, while compatriots Jordanne Whiley and Gordon Reid advanced to Sunday’s women’s and men’s singles deciders during the penultimate day of action at Nottingham Tennis Centre.
Calendar-year Grand Slam winner and British No. 1 Whiley will be looking to add to the doubles title which she won with Lucy Shuker on Saturday when she takes on two-time defending champion Jiske Griffioen of the Netherlands on Sunday.
The London 2012 Paralympic bronze medal winning pair of Shuker and Whiley, competing together for the first time since being finalists at the British Open at the same venue in July, beat South Africa’s Kgothatso Montjane and the USA’s Kaitlyn Verfuerth 6-4, 7-5.
“It was a good win and nice to win a title with Jordanne again,” said Shuker.
“Our games really complement each other and I’m chuffed to end the season with that doubles victory.”
Whiley had earlier beaten German fourth seed Katharina Kruger 6-2, 6-2 in her women’s singles semi-final.
Meanwhile, in a gruelling decider Lapthorne and Burdekin fought back from 5-2 down and saved five match points in the third set to overcome Australia’s Dylan Alcott and fellow Brit Antony Cotterill 6-4, 1-6, 7-6(2) in their quad doubles final.
Victory was particularly sweet for US Open champion Lapthorne who had earlier been beaten by British Open champion Alcott in the singles decider 6-2, 6-1.
“It was a tough singles,” said Lapthorne. “To come back from match points down and win the doubles is a great feeling and showed good character.
“If I lost that match this day would have been a downer, hopefully this gives me momentum for the Masters in my home city of London next week.”
World No. 3 Reid is one game away from defending his Nottingham Indoor title and faces Sweden’s former world No. 2 Stefan Olsson on Sunday after fighting back to beat Belgian third seed Joachim Gerard 5-7, 6-1, 6-4.
With the year-end NEC Wheelchair Tennis Masters being held at Lee Valley Hockey and Tennis Centre in Queen Elizabeth Olympic Park, London next week, the semi-final win over Gerard was all the more significant.
“I’m pleased with the way I managed to get myself out of a bit of a hole and turn the match around by starting to play some really good tennis,” said 23-year-old Reid.
“Jo is one of those players who is going to be there for the Masters next week and I could potentially be playing him, so it was nice to get this win in Nottingham.
In other results, Korea’s Ho Won Im beat Pim Palmen 6-4, 6-2 in the men’s consolation final.
Organised by the Tennis Foundation, the Nottingham Indoor is an ITF 1 Series event on the UNIQLO Wheelchair Tennis Tour and is held at Nottingham Tennis Centre. The tournament is supported by Nottingham City Council and entry is free to all spectators. For more information please visit www.nottinghamindoor.org.uk/.
Tickets for the NEC Wheelchair Tennis Masters start at just £10, with children going free, and can be purchased via the tournament website:http://www.wheelchairtennismasters.com/. 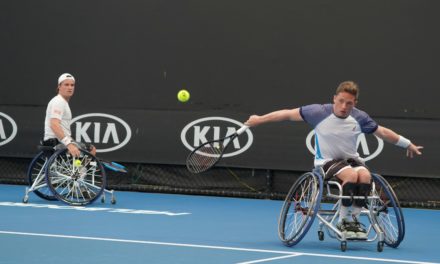 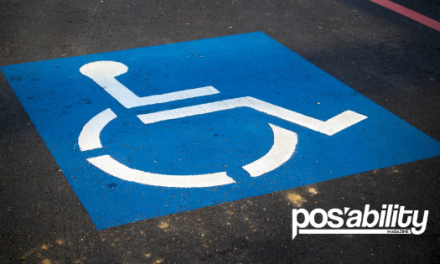 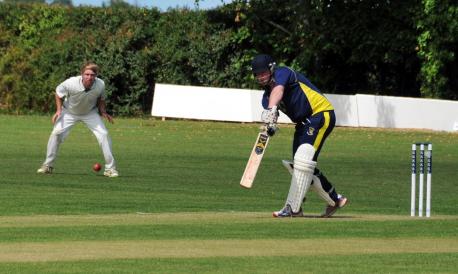