A link between epilepsy and autism has been discovered for the first time.   Breakthrough research from the University of Bath found adults with epilepsy have higher traits of autism and Asperger syndrome.  It found epileptic seizures disrupt the neurological function that affects social functioning in brains, resulting in the same traits seen in autism.

These characteristics include impairment in social interaction and communication as well as restricted and repetitive interests.

SallyAnn Wakeford, a PhD student at the university’s Department of Psychology, said the traits could be ‘severe’ and go unnoticed for many years, having a great impact on the lives of those experiencing them.

Dr Wakeford said: ‘The social difficulties in epilepsy have been so far under-diagnosed and research has not uncovered any underlying theory to explain them.

‘This new research links social difficulties to a deficit in somatic markers in the brain, explaining these characteristics in adults with epilepsy.’

Dr Wakeford and her colleagues discovered that increased autistic traits were common to all epilepsy types, but in adults with temporal lobe epilepsy (TLE) in particular.

The researchers believed this could be because anti-epileptic drugs are often less effective for TLE. The severity of autistic traits was increased with seizure activity.

In the self-funded research, Dr Wakeford carried out a comprehensive range of studies with volunteers with epilepsy and discovered that all the adults with epilepsy showed autistic traits.

She said: ‘It is unknown whether these adults had a typical developmental period during childhood or whether they were predisposed to having autistic traits before the onset of their epilepsy.

‘However what is known is that the social components of autistic characteristics in adults with epilepsy may be explained by social cognitive differences, which have largely been unrecognised until now.’

Dr Wakeford, who completed the work as part of her PhD thesis, believes the findings could lead to improved treatment for people with epilepsy and autism.

She added: ‘Epilepsy has a history of cultural stigma, however the more we understand about the psychological consequences of epilepsy the more we can remove the stigma and mystique of this condition.

‘These findings could mean that adults with epilepsy get access to better services, as there is a wider range of treatments available for those with autism condition.’

The findings were welcomed by Margaret Rawnsley, research administration officer at Epilepsy Action.

She said: ‘We welcome any research that could further our understanding of epilepsy and ultimately improve the lives of those with the condition.

This’ research has the potential to tell us more about the links between epilepsy and other conditions, such as autism spectrum disorders.’

Mark Lever, Chief Executive of The National Autistic Society, said: ‘This study is still under review and so we urge people not to jump to conclusions about its implications.

‘For some time research has suggested an association between some forms of epilepsy with autism traits. We would like to study this particular research in more detail when it gets published to see if it builds on our understanding.

‘Autism is a very complex condition and is thought to be the result of many different underlying physical and genetic factors.

‘Above all, the most important thing is that we work to ensure people with autism receive the support they need to reach their full potential.’ More than 1,200 people with a learning disability die of avoidable causes 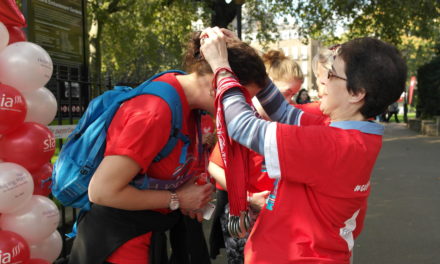 Going The Distance returns to London and Liverpool